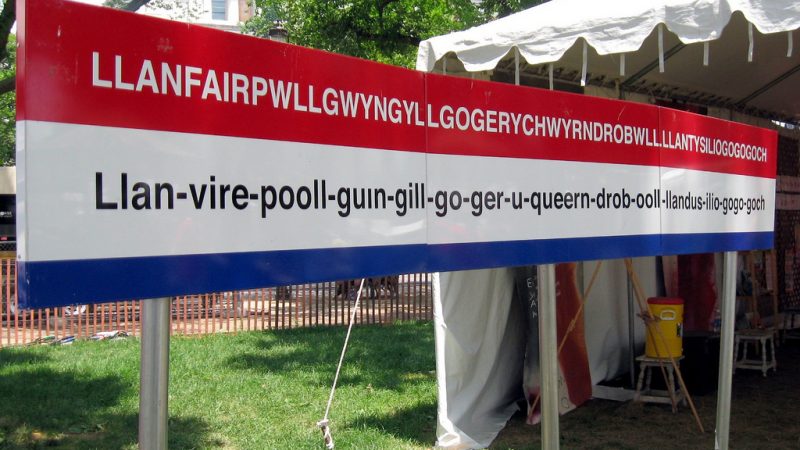 “Llanfair­pwllgwyngyll­gogery­chwyrn­drobwll­llan­tysilio­gogo­goch” is the name of a village in Wales and is also the place with the longest name in Europe, as seen as a Welsh language exhibit at 2009 Smithsonian Folklife Festival. Photo by Alan Kotok and used under a CC BY 2.0 license.

The DigiGlot Newsletter is a bi-weekly collaborative newsletter that reports on how indigenous, minority, and endangered language communities are adopting and adapting technology to increase the digital presence of their languages, and in the process changing the internet landscape by increasing linguistic diversity online. 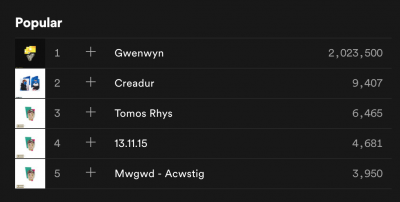 Screenshot from Spotify with the number of plays (as of January 29, 2019)

In late 2018, Welsh rock band Alffa became the first group to release a song in the Welsh language that hit one million plays on the Spotify streaming platform with the song “Gwenwyn”. This achievement is especially noteworthy because the band wasn’t particularly well known outside of Wales, but thanks to Spotify’s reach, listeners from as far away as Brazil and Mexico discovered a song in a language spoken by approximately 700,000 people. Rhiannon Lucy Cosslett, a columnist with the Guardian newspaper who herself is Welsh, dug deeper to inquire why a Welsh language song became so popular. She spoke with Alun Llwyd of the music distributor PYST, who credited the Spotify platform’s openness to music in all types of languages. “What’s beautiful is that Spotify judge the songs on musical merit, not the language or the band,” Llwyd said. “Nobody knew Alffa outside a small part of Wales. This is testament to the strength of the song.” Since that earlier story was published, the Welsh song has hit two million plays.

A new Cree language podcast started by Nick Wapachee, a journalism student from Nemaska, Québec, aims to help young people develop their Cree language-speaking abilities. He noticed a trend of young Cree people increasingly speaking English and wanted to help provide more digital content in Cree, so he started a podcast sharing the stories of Cree elders. The In Eeyou Istchee podcast “promotes Cree diversity, respect, and freedom of expression” and helps bring the Cree language to speakers and learners, wherever they are. The podcast can be found on iTunes and Soundcloud.

In 2013, the international broadcaster Voice of America (VOA) started transmitting in the Bambara language, one of the official languages of Mali, spoken by approximately 15 million people. VOA also has a Bambara-language website which recently attracted attention for employing a “Frenchified” version of this Manding language and not the official orthography developed and promoted by the government and partner institutions such as the African Academy of Languages.

Dr. Coleman Donaldson, a linguist, researcher, and teacher of Manding languages noticed the VOA’s use of French orthography. Don Osborn, author of the book African Languages in a Digital Age, wondered whether the reason for this was a scarcity of keyboards to enable writing in the official Bambara orthography. Ultimately it might boil down to VOA’s determining that only a small portion of their audience can read Bambara orthography, but Osborn also points out that this is probably an untested assumption. The Cercle Linguistique Bamakois has initiated a petition calling on VOA to adopt the official orthography. The petition points out the effort and resources that went towards the development of the orthography, and that international broadcasters such as Radio France International have made an effort to use the official orthography on their websites.

A language app to teach kids the indigenous languages of Canada 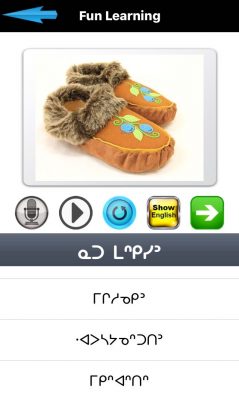 KOBE Learn is an app designed to help young users learn common words and phrases in Ojibway, Cree and Oji-Cree, the traditional languages of First Nations communities in northwestern Ontario, Canada. The app is collaboration between the local Board of Education, language teachers, elders and community members. The Board was seeking a modern teaching tool that could help to carry indigenous languages into the future.

“Many of our elders are passing away, each day, and it’s really important to keep what we have now,” said Sarah Johnson, the Board’s native language lead. “A lot of our children entering school are not speaking their first language. So this is one small way of retaining, keeping the language.”

Is there an app for that (in Welsh)?

For many of us, the mobile phone has become an extension of the self – always present, and mediating much of our interaction with the rest of the world. Speakers of major world languages are used to having apps and games available in their language, but speakers of minority languages like Cymraeg (Welsh) seldom enjoy this luxury. In a new study, Daniel Cunliffe, a professor at the University of South Wales, examines the more than 400 Welsh apps in the Apple App Store. The research attempted to identify every Welsh language app, as well as to better understand the motivations and perspectives of their developers. Cunliffe found that Welsh app developers face multiple challenges in reaching users, especially with regard to the discoverability of their apps. The study, which concludes with recommendations for developers, language promotion NGOs, and others, will be of interest to any language community that seeking to engage users via their mobile devices.

Petition for Wales to have devolved control over Crown Estate in...